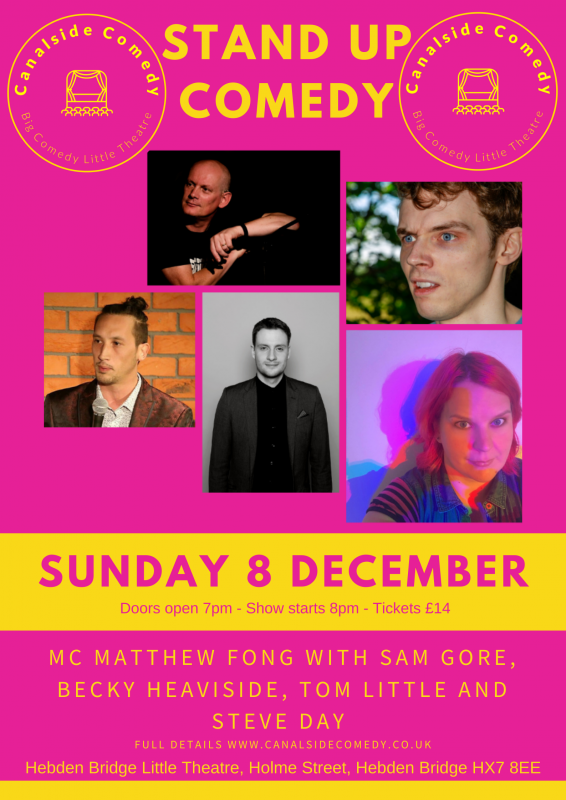 Canalside Comedy has lined up another cracking night of stand-up comedy, for Sunday 8 December.
MC Matt Fong will be joined by Sam Gore, Becky Heaviside, Tom Little and Steve Day.

Matt’s debut solo show at the 2019 Edinburgh Fringe Festival, was picked as one of the best shows in Edinburgh, so we’re excited to see him in Hebden Bridge.

Newer Act, Becky Heaviside will perform alongside prolific writer and performer, Sam Gore. Sam cemented his position as one of the best new comedians of his generation with five New Act of the Year awards, including the national Laughing Horse competition. With his rapid-fire delivery and unique use of language and imagery, nobody writes a simile quite like Gore.

‘Inventive, unexpected and often very silly…[Tom Little]…surely can’t remain a hidden treasure for long.’ – Chortle. This is a rare chance to see him in such an intimate setting.

Closing the show, we’ve got Steve Day, Britain’s only deaf comedian – well if there are any others, he hasn’t heard. A familiar voice on Radio 4, for the past fourteen years Steve has been performing to huge laughter around the country (well they tell him the laughter was huge to humour him, he doesn’t know either way).

Doors open at 7pm for this show at Hebden Bridge Little Theatre, which starts at 8pm. Tickets cost £14. Little Theatre members receive a 10% discount with this code: 2198.