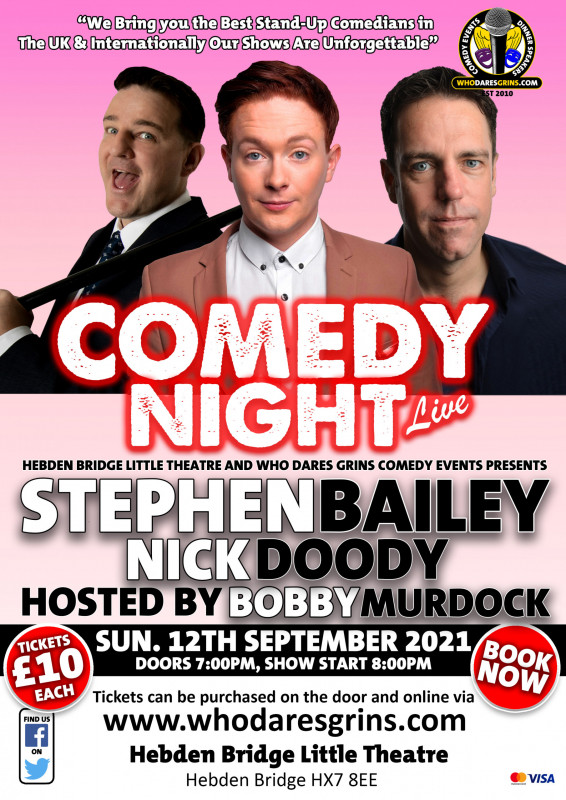 Headline Act Stephen Bailey
As seen on Live At The Apollo and Comedy Central.
‘A natural talent for making audiences laugh’
Comedian, TV presenter and writer Stephen Bailey is familiar to audiences for Big Brother’s Bit On The Side, he is making noise on the comedy circuit by being fun, charming and sassy. A skilled improviser, Stephen is ‘annoyingly sharp’ and can currently be seen supporting Katherine Ryan on her UK tour where NO topic is off the table – all done with ‘fantastic natural wit and charisma’.

Nick Doody
‘Some of the best material I have heard in a while, comic genius’
As seen and heard on BBC Radio Four, BBC Two, Channel Four and Comedy Central.
Something of a homecoming gig for local boy Nick, who’s from Hebden Bridge. Nick’s been performing comedy since the 90’s when as a student he got off to a pretty good start by supporting the legendary Bill Hicks, at Bill’s request.
Since then he has performed all over the world: Ireland, France, Spain, Switzerland, Germany, The Netherlands, Dubai, Thailand, Malaysia, Estonia, you get the idea.

MC Bobby Murdock
Bobby is instantly likeable with the ability to take you on a journey with him. A master of short stories and silly jokes.

Tickets cost £10, and are available online, at: www.wegottickets.com/WhoDaresGrins