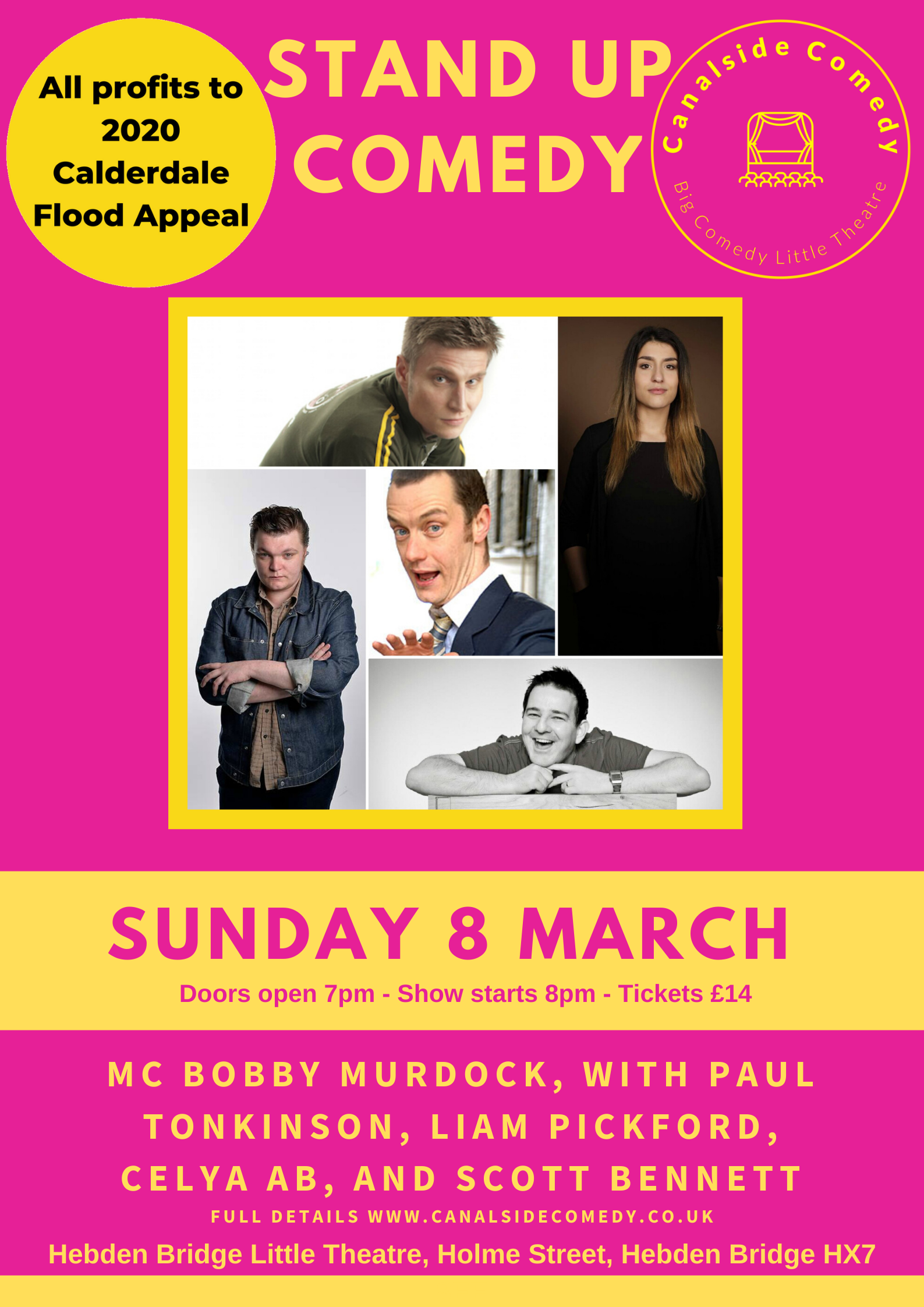 Canalside Comedy is gearing up for its next evening of comedy, on Sunday, 8 March. Top circuit names Paul Tonkinson and Scott Bennett are joined by newer acts, Liam Pickford and Celya Ab and your host for the evening will be the talented Bobby Murdoch.

Yorkshire man, Paul Tonkinson has long upheld his esteemed reputation as one of the finest stand-ups the UK has to offer. With a unique and distinctive style, Tonkinson is noted for his effervescent physicality and skilful impressions, which bring alive exuberant, tender comic reflections on love, family and the day-to-day idiosyncrasies of 21st century living. A plethora of first-class material, combined with tremendous charm and irrepressible, infectious energy make for a formidable talent.

Liam Pickford has crafted his own unique brand of stand up, mixing cleverly honed material and punchlines with excitingly unpredictable audience interaction. All this, mixed in with a hint of whimsy and clever observations, is delivered in a wonderfully unenthusiastic and grumpy style. It has been said if Stewart Lee, Jack Dee and Morrissey ever had a child together then Liam would be the outcome.

Celya Ab is a most unique emerging talent. Originally from Paris, and of French-Algerian origin, Celya is now residing in the sunny city of Birmingham. Celya’s sharp wit brings a unique look into life as a EU expat living in post-Brexit Britain.

Scott Bennett’s stand up just gets better and better. Already being compared to the likes of Peter Kay, Jason Manford and John Bishop, he’s surely got a bright future. Naturally hilarious, Scott is immediately engaging with his brilliantly worded observations. See him in the intimate surroundings of Hebden Bridge Little Theatre before he starts stadium tours!

Compère Bobby Murdoch is instantly likeable and has the ability to take you on a journey with him. A master of short stories and silly jokes, Bobby has great variation in his show with witty one liners and amazingly funny stories.

Tickets for what is sure to be another great evening of comedy at Hebden Bridge Little Theatre, are already on sale, price £14 (https://www.ticketsource.co.uk/canalside-comedy/canalside-comedy/e-drpxbx). Doors open at 7pm, show starts at 8pm. Sign up to the Canalside Comedy Newsletter for a 10% discount code and find full details of the acts at www.canalsidecomedy.co.uk